The goju ryu system of karate do has many strikes that must be learned.  Generally speaking, almost any part of the body can be used.  Here are some of the most used that should be known by every karateka:

While there are other strikes, knowing these will provide you a good foundation in goju striking technique, and prepare you for their use in kata.

The fist generally begins in (and the opposite fist returns to) a palm up position high and tight on the ribs.  Others systems, and some goju schools, teach this as held lower, just above the belt. This is called the chamber.

Front punch begins chambered high and tight on the ribs, palm up.  Fist leaves the side, arm slides along the ribs palm up, until the elbow leaves the side.  Opposite arm pulls to chamber.  Shoulders square to target at impact. As it leaves the side, the fist rotates toward thumb to face floor, completing its rotation as punch reaches full extension.  Point of contact with target is with the first two knuckles.  Note that at point of contact there should be 2-4 inches of extension left in the arm, so that punch penetrates the target. Practice this penetration on pad or makiwara, since dojo training with partner is usually pulled, resulting in poor combat habits. Keep the shoulders down and relaxed.  Power is generated through relaxation and explosive movement, along with forward motion of body as stance moves (lunge punch) or through rotation of hips (reverse puch). Some instructors teach to tense arm on impact, though such tension can restrict chi/qi/ki flow. 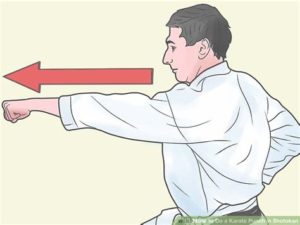 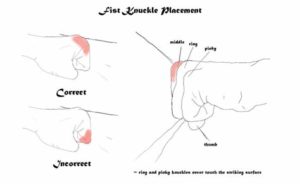 This is a close punch with the fist, palm up, delivered in close range to opponent.  It can also be used as an upward punch (similar to the boxing upper cut).  In goju the horizontal punch is practiced where the arm never extends beyond one “fist distance” off the ribs, remaining palm up throughout.

Furi uchi, hooking or wielding strike, is performed moving the fist from chamber to behind your own kidney, then whipping around (as hips rotate toward opposite side) and forward to the side ot target’s head.  Starting from behind the back (kidney region), the punch is generated from a short, quick rotation of the hips, and then let by the elbow whips around in an arc toward the target. At impact, fist should be facing away from you, with back of hand toward you.  While this technique snaps out and back from target’s point of impact, in combat it can also be applied without retracting the fist upon impact, extending at least two inches through the target.  Practice on a pad or body shield to understand penetration.  Be careful not to hit the back of knuckles on target, which can cause injury to puncher.

Backfist is performed by extending the cocked arm (generally starting from in front of body, palm to solar plexus) outward to side to extension where wrist snaps as the arm is pulled back toward you, striking with the first two knuckles on the finger side (same point of contact when punching).  It can be performed at various angles, including horizontally (from solar plexus) and vertically to front or side (starting fist to shoulder).  This punch is also applied with a whipping motion.  Application note: Backfist in goju is usually applied like a jab, with little power.  To generate greater power, apply body movement (either in rotation or forward) until contact is made.  Spinning backfists (where body spins around and hand blindly strikes), the backfist is fully extended and continues through point of impact to return in downard arc to chamber. 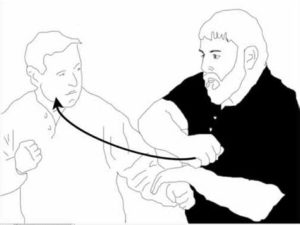 The shuto or knife hand strike is the traditional “karate chop,” and one of the most recognizable (but least used) combat techniques.  Hand position is critical, with thumb tucked in, fingers together in a straight hand, striking with the pad along the distal, outside edge of hand (NOTE: do not over-rotate and make contact with the bones on the side of hand, lest you break them).  Shuto is practiced in two ways. First is an inside-out motion, starting with the palm to the opposite ear, elbow of striking arm toward floor.  Opposite hand is extended toward opponent, downward about 45 degrees toward floor, as palm is “chambered” by the ear, and retracts to chamber as the shuto extends toward target.  Hand rotates to palm away from body as it moves outward from ear to mid body, ending in similar position as yoko uke (aka chudan uke). The second way is to bring the striking hand to the same side ear palm up as ìf a waiter holding a tray.  Hips cock back when bringing hand to ear, then rotate in opposite direction as strike is delivered in a circular, hooking motion parallel to floor, striking to centerline of opponent. In application targets include pressure points and soft tissue, such as side or back of neck, throat, solar plexus, groin, and floating ribs (e.g., last move in Saifa). Palm can be either up or down upon impact, though rotation of wrist can provide additional torgue. 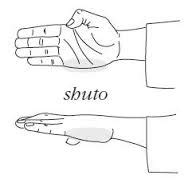 Same hand position as the shuto, striking with the finger tips into throat, under ribs, solar plexus or groin.

Ridge hand is applied from behind back (open hand, palm up) in same motion as wielding strike, except this time the hand is in the same shape as shuto (fingers straight and together, thumb tucked).  Point of impact is side of index finger/knuckle, palm usually to floor.  Alternative application begins in front of opposite hip, striking palm up (again, hitting with side of hand along the index finger/big knuckle), traveling in an arc to opponent’s throat or under ear/TMJ joint.  This strike is most effective when penetrating target by a couple inches.  Again, after attacking technique’s energy is expended, arm must be pulled back to center line for defense while other arm or legs attack.

Hand position requires fingertips and thumb to come together, bent wrist pointing back toward your own elbow.  Point of impact is the bony protrusion of the arm bone on the thumb side of the wrist joint.  It can be applied like furi uchi, but is most often used striking upward (to chin), forward (to groin) or side (ribs, solar plexus, groin, or side of face).  Like the reverse ridge hand, coming from opposite hip angled upward toward target, it can also be used to strike with palm up.  Power comes from body movement (coordinating forward weight shift and hip rotation).

For palm heel strike use an open hand position (do not tuck thumb or try to keep fingers together). Palm strikes are applied like a front punch, striking with an open hand at the base of the palm to pressure points in torso as well as to groin, chin, and nose. Point of contact on palm is at the pad at the base of the flexed (bent back exposing palm hell with fingers outstretched) hand.  Again, allow for at least two inches of penetration.  Palm strike can also be applied downward to a locked (extended) elbow, knee, or in breaking boards or bricks supported on each side from below.. 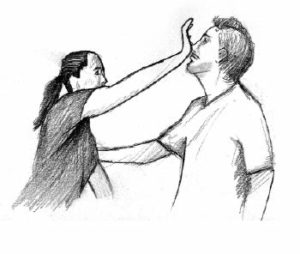 Elbow strike is a useful close-in fighting technique applied in various ways.  Practice from same position as starting front punch, retracting pulling arm while extending striking arm from chamber.  Hand position can be in clenched fist or open palm.  It is applied at various angles, including foward (striking palm moves to your ear), horizontally (palm toward floor and applied by pulling arm across body from opposite chamber position), as well as downward (starting with arm above head and striking down with elbow on center line). Coordinate the elbow strike with appropriate body rotation or forward moment.

Hammer fist is essentially striking with the side of the fist like you’re swinging a hammer. It is applied by circling the fist behind the head and then bringing it straight downward into your opponent’s head, or coming outside in in a downward arc. It can also be applied horizontally, palm up, as in Saifa kata. 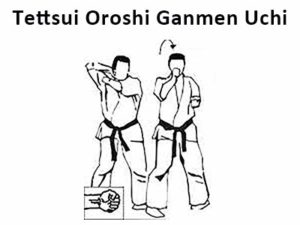 All techniques should start with body totally relaxed, only having enough internal tension to maintain posture.  As a general practice, in application all parts of your body start and stop at same time.  Feel movements starting from feet on floor, rotation of hips and forward motion of body are all coordinated with strike, and should all begin and end at same time.   This will allow maximum generation of ki (keep shoulders and arms relaxed and “hollow” so energy can flow through them like water through a hose).  Some practitioners raise the striking shoulder on extension to generate more force, but that often results in greater tension which reduces speed, explosiveness and ki flow.