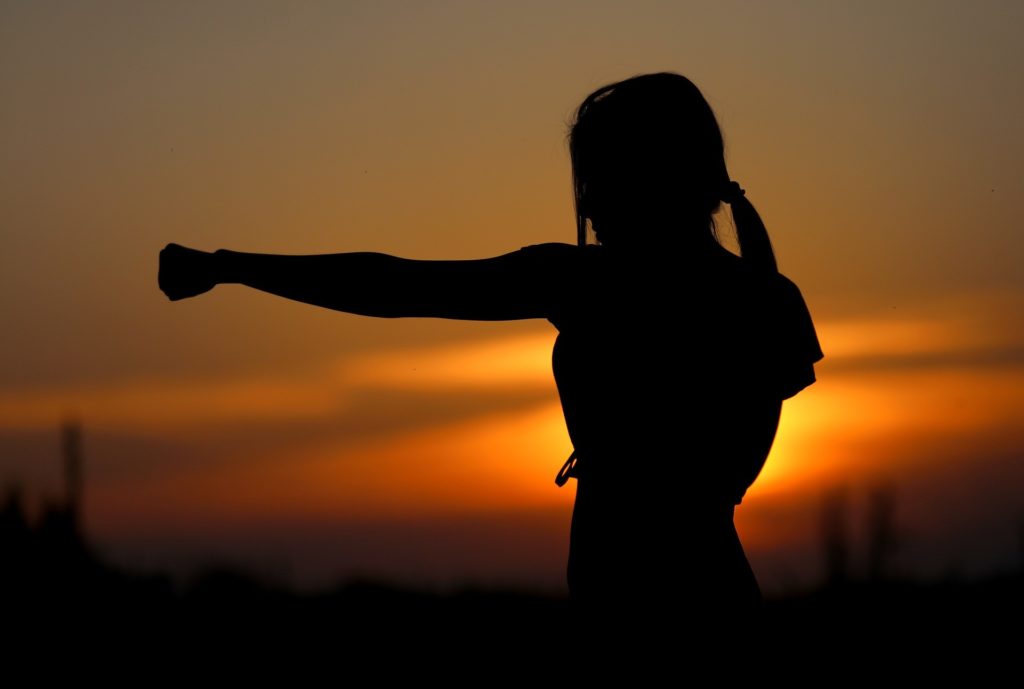 When I started teaching goju-ryu, structuring practices was easy. A vigorous jumbi-undo, followed by line drills for basics and basics with movement, was the staple for beginners and advanced students alike. After that, kata and kumite became a juggling act, trying to get enough of what the lower ranks needed while still keeping it challenging for upper belts.

Training at home is different. Workouts are less structured and more intuitive, and usually much shorter. Strength and conditioning, and even extensive stretching, may be omitted or relegated to off-days. And the choice of which material to cover determines a lot of where to focus one’s efforts.

As you know, Goju-at-Home offers a lot of videos for reference. But I don’t train to videos, and don’t know if you do, either. Instead, I watch them to get ideas of things I want to work into my training, and then work them into a practice that just sort of unfolds after I start.

Let me give you an example.

Yesterday we began with a few hip stretching exercises, then immediately started into footwork drills for nimbleness and balance. After that we resumed work on developing what I call “kill shots,” being a technique that you know will put a person down if landed properly.

In this instance, we worked on a forward arm elbow strike applied to the solar plexus from a nearly side-facing stance best described as a cross between a front and horse stance, where weight is 60% forward and the rear leg is bent slightly inward with knee pointing toward the floor. The idea is to get comfortable moving into the stance and delivering a powerful blow, coordinating the step, weight shift, and body rotation for maximum power.

Here’s an example (wait for the elbow):

Obviously this isn’t a fighting stance; it’s one to shift into only to deliver a strong blow when an opening to move in has been created, usually from a fighting stance or more probably after an exchange of techniques (blocking and striking back and forth) with your opponent.

It sounds totally impractical written here, but when done in the flow of combat it can be an effective kill shot. As always, there are many other factors that go into making it that way.

So we practiced stepping from different fighting stances into the hybrid shiko dachi while applying the principles of generating power. Over and over again, first the left and then the right, it was repeated, trying to create a feel for the movement to etch into body memory.

Then we switched to doing a slide-step reverse punch from our hsing yi repertoire, practicing it with different stances to get a feel for balance and power. For the stance that’s used can make all the difference, yet no one stance is ever etched in stone. It ALWAYS must vary based on the situation, body distance and position, and what your opponent is doing, among others.

The idea here was to know what your strongest techniques are and how to deliver them when needed to a particular target — in this case, middle body/solar plexus.

So when you’re practicing at home, you might try something similar. You have a wide range of techniques available to hit an opening there. Which ones can you deliver effectively? In what stance or body position? Out of what positions can you get there? Where must your opponent be?

As you do, you might start with a seiken zuki. You can punch to solar plexus from a high stance, but at what distance? How will you get into the appropriate striking range? Will you step into a stance, and if so, which one will allow you greatest movement, flexibility and power (there may be a trade-off)?

Would you do a lunge punch? Or a reverse punch? How will you do it? Now practice it over and over again. Try it with a front stance. Then a rear-weighted stance. Or any other stance you know. Which is most powerful for you? Which can you do easily? Where do you struggle?

The key in practice is not just to repetitively do movements over and over again, but to perform them as if you were using them in a fight. Know yourself. Know what fighting style you’re most comfortable with. Know what you need your opponent to to in order to deliver an effective kill shot.

We might go through an entire practice doing only a handful of movements and techniques, trying different variations to allow students to find what works best for them. This is what you must do from home, taking what you’ve learned and figuring out how to best apply it.

My philosophy is to be an effective fighter — not a kumite player, but in a fight — you need to be able to 1) block anything at any distance effectively and be able to smoothly (and hopefully simultaneously) counterattack any opening that is created; and 2) have a handful of techniques you can deliver from different angles to different areas of the body, depending upon what presents itself. And then through practice and repetition, train yourself until you can respond to any situation with no thought, just appropriate reaction.

Your choice of techniques will depend on a lot of things, most notably your level of knowledge and ability to deliver them effectively with speed and power. They may change as your fighting style changes or as you improve.

Regardless, your practice should include time testing each of them and how you’d deliver it in combat, until they become automatic and reflexive in nature.

For instance, I would never go into a fight expecting to deliver that low stance middle body elbow, but I would be ready to instinctively launch it when I could control the center line and had an appropriate opening.

Develop your own kill shots. The technique doesn’t matter. Neither does your stance. Only that you can deliver whatever techniques you do best upon demand with force on target. Hopefully without telegraphing it along the way.

You’re working from home. There’s no one to tell you what to do or how, though we have a lot of reference materials to help. But when push comes to shove, it’s all up to you.

What are you working on that will make you more effective?

Later on, you’ll take these “kill shots” and work them into your fighting flow. But for now, just get something you can rely on should you need it.

Anyway, that’s my two-cents’ worth for today. Give it a try.