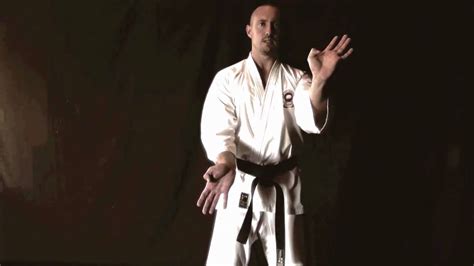 By now you probably know I’m something of a maverick. Rather than take what we’re told on face value, I tend to dissect everything for its underlying movements and principles and explore how those might be applied in different situations. Today I want to put the ju in Tensho kata.

First, let’s review. While there’s great benefit in practicing formal combinations, that’s not my thing. I see the martial arts at its highest expression as a fluid dance that flows back and forth, each combatant nimbly responding to what the opponent does free of thought. Remember “no mind” from The Last Samurai when Tom Cruise was training with the samurai and later how it helped him in the street fight?

So get it out of your head that ANYTHING I tell you should be done intentionally with aforethought. I don’t attack; I counterattack, and that’s the way I train my students (though sometimes in training someone has to so they don’t just stand there staring at each other, waiting for the other to make the first move).

Nevertheless, it is crucial to understand the principle behind the technique and how, why and when to apply it. Some of that I’ll tell you; some of it you’ll have to figure out for yourself, because your own self-discovery is important to making it your own so you can use it when needed.

Second, ju is the concept of softness, which entails a considerable amount of relaxation and “non-effort.” I apply it not only to blocking, but also to the generation of power through explosive movements. In practice, think of ju as performing a block in a manner that the opponent barely feels your hand when it engages the oncoming strike or kick. No more bruised wrists or clunky blocks. Rather, it often entails joining with the oncoming moment of the attack and gently redirecting it so it doesn’t hit you.

Third, when applying a block with ju, grabbing, hooking, trapping or otherwise attempting to control the attacking limb should be judiciously applied, if at all. Why? Because the energy put into it by the contraction of your muscles negates the rapid redirection of your blocking arm into a subsequent technique, whether block or strike. It tends to take that hand off the table, making it unusable until you release your tension so it can move elsewhere. In short, it makes your block sticky, which can be both a good thing and bad thing. So just understand that it can both help AND hurt your ability to nimbly respond and counter.

With that said, let’s talk about tensho. Or at least, let’s start on it today.

I will assume you are familiar with the kata’s basic movements, and maybe even have some understanding of the principles involved. But if not, don’t worry. You can always look it up in our digital dojo to get a gross idea of what I’m talking about.

Tensho is performed with dynamic tension and ibuki. I teach it to be performed at approximately 70% of maximum force, though your sensei may teach otherwise. No matter.

What does, though, is your ability to relax between movements and only apply tension at strategic points, like at the yoko uke before the soft movements, and the palm strike after the first two of them. In application, it wouldn’t matter, because I wouldn’t recommend becoming a sitting duck in front of an oncoming attack and blocking yoko uke, nor palm striking with tension in body, shoulder, arm or hand. This is where you must learn the difference between practicing kata, and learning to apply the principles behind what it’s teaching.

In actuality, you’d be moving out of the way, even when blocking yoko uke. And the strike would be totally relaxed, tensing if at all only at the last moment upon impact (there are differing theories on this).

Now for the ju blocks.

After the double yoko uke you pull back the left fist to chamber. Then you perform a series of two techniques that I was taught as eye gouges. Maybe they are, and certainly can be. But in practicality, these two movements are at the core of the ju in goju. Here’s how I teach them for use by my students.

The first is a kake uke-style soft block with the right hand, meeting the opponent’s strike with the right arm from a chambered position. It is equally applied to an attack from any position, but it is easier to visualize as a standard seiken zuki.

Your right hand must extend and connect lightly with the outside of the punching wrist just as it leaves the side. That means you must be aware and react quickly. Thinking will slow down that process, though you’ll have to think about it until you’ve ingrained the technique into your head.

As the punch extends, after you meet it your arm will arc slightly to the right and retract back to just in front of your right pectoral muscle (not a full chamber). It can end up lower if you please, but note it will restrict your ability to perform the next movement.

The second block is also a kake uke style block of opponent’s left-side punch with your same right hand that you just blocked with. It will circle slightly across your center line and back to the same place along your right pectoral muscle.

From there, you tense and deliver a palm strike to the opponent’s chin. In the kata, both blocks are performed smoothly and quickly while inhaling; the strike is done slowly with tension and ibuki.

So what exactly are you practicing here? Well, one thing is you’re learning to fight with one hand, in case the other arm is injured or otherwise unusable. Think Neo in the final fight of The Matrix. Another is you’re learning to join with an oncoming attack as soon as it is launched. Otherwise, your ability to deflect or control it is reduced significantly.

Most importantly, though, you’re learning to CLOSE your opponent (move the attacking limb across his/her centerline) so you can counter to its undefended side — WITH EITHER HAND. While there are many variations of both techniques (using one and two hands), the central premise remains the same. One has your hand crossing the center line to engage and redirect the attack (think kake uke or yoko uke); the other blocks with the same side as the attack (a pressing block across your body), saving you both time and distance.

To apply these blocks, practice not only from a static sanchin stance, but also by sliding your foot on the same side as they attack (your left foot if they punch with their right) forward and slightly to the outside, moving into a high horse stance while your block arm “rides” along their wrist. Your same side blocking elbow will almost lie on their arm when the energy is expended, with you sideways to the attack and your shoulder close to if not adjacent to the attacker’s shoulder. Similarly, your opposing side “kake uke” will end up with you in a left foot forward side posture, but your elbow will be down toward your ribs in the usual end-of-block position.

Repeat for the opposite side. It shouldn’t matter which of your feet was forward to start. You should try to end up in a side posture (high or low) parallel to the line of attack, facing the previous centerline.

This is how I want you to see ju, blocking mostly by getting the hell out of the way, using your hands to softly steer the attack where you want it to go.

As for the palm strike

The strike, on the other hand, is totally useless as performed in the kata. Using tension from sanchin, where you’re square to your opponent, is a recipe for disaster for all but the most advanced practitioners. It locks you up and leaves you a sitting duck for a counter against you, with your squared stance presenting an easy choice of targets and openings for attack.

How I teach its application is totally different, and involves significant body movement coordinated with the strike. Assume the right sanchin stance from the kata. (Again, remember this is for APPLICATION, not kata practice.)

First, crouch slightly in your sanchin stance, and coil yourself slightly counterclockwise (twisting toward your striking arm). To do this your knees will bend and your waist will rotate to the right. Lower your right hip as you coil, but shift your weight slightly to your front (right) leg.

To deliver the strike, rotate counter-clockwise from your right knee and shoot your energy downward from your right hip across your body into your left foot. It then rebounds up from the ground through your waist to your right shoulder and arm.

Allow your hips to uncoil counterclockwise as your strike begins from your pectoral muscle. It is important to be totally relaxed from ground to your fist (other than compression of/tension in your lower abdomen that generates the energy like a pump). Allow your arm to EXPLODE to the target. Think sudden speed, accelerating all the way through the movement, as your hips recoil back to your left. When one part starts, all start. When one part ends, all end.

As your strike makes contact with the target (no more than 18″ out), the palm will naturally recoil a couple inches (don’t pull it back), as will the hips as they counter-coil back into your regular sanchin stance, but with 60+% of your weight shifting to the front foot in synchronization with the strike. The shoulders will rotate to right side forward about 45 degrees toward the target, and then recoil slightly to about 60 at ending position.

In short, the palm strike is a LUNGE strike without stepping, using the rotation of the weight and its shift from back to front as you uncoil to create explosive momentum (and when you’re ready, to expel jing or qi from your palm with the strike).

Okay, I’ve talked enough. Hopefully you’ll get the idea. Maybe if I get industrious this weekend I’ll get in front of the camera to show you.