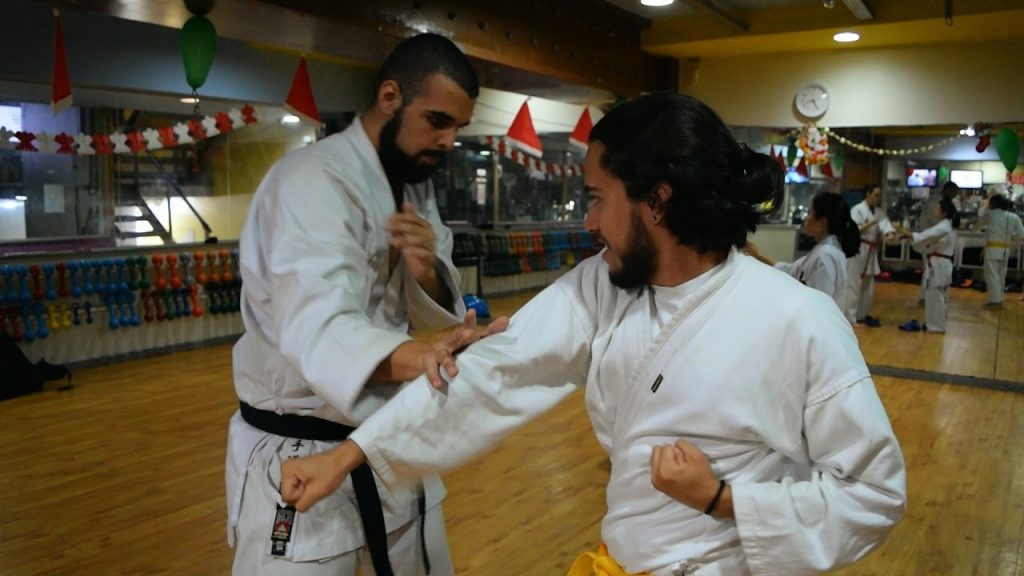 Goju-ryu is supposed to be famous for its soft blocking. At least, that’s what the “ju” in “goju” is supposed to be about. But after a lifetime of training, I realize that the goju I learned and see taught by other senseis really doesn’t seem to do it justice.

Not that I’m dissing the training. It’s great! But soft it’s not. At least, not in the way I’ve come to understand soft.

First, let me say that blocking is blocking. It really doesn’t matter how you block a strike, or even block it at all, just as long as it doesn’t hit you. So keep doing whatever works for you. But I’m going to try to put into words what we’ve been covering the last few practices here in Coral Springs so you can better understand what I’m talking about and maybe even try it on for size.

First, a primer on what soft blocking is all about. The idea behind is to either deflect or move around an oncoming attack using very little force to redirect it. When done properly, contact with the attacking limb should be minimal, only enough to guide it elsewhere, allowing it to expend its energy without hitting you.

Sometimes you may want to try to trap or control the attacking arm at some point in your defense/counterattack, but that’s not necessary. So don’t think of it as a hook, grab and pull the way some teach kake uke. Soft blocking can involve that, but it isn’t necessary.

Instead, think of the soft block as an extension of your body that moves in coordination with your waist and shoulders. In fact, for many soft blocking applications, the arm rarely moves laterally more than a few inches, and almost never past the edge of the body line.

This is certainly how most blocks are taught, but the problem with karate training is that most styles, goju-ryu included, generally teach blocking from a static body position, regardless of stance. The arm moves to engage the attack, but the body too often stays still — and unfortunately, often square to the attacker and perpendicular to the line of attack.

What I’ve been trying to impart to my goju-ryu students are concepts I picked up from bagua and tai chi, that when one part of the body moves, all parts move. And everything is coordinated with the waist, which may rotate one way or the other (or both), as well as forward and back.

In short, soft blocks as well as all other techniques are a study in body movement applied to minimize force imparted against the defender and maximize it in the attack/counterattack. As such, at its highest level, it incorporates the old adage, “A block is not a block.”

What do I mean? Well, the object of blocking — any blocking — is don’t get hit. And the best way not to get hit is to not be there when the strike arrives. Every beginner knows well enough to jump out of the way when they can and retreat from an attack, especially a kick.

Well, the concept in soft blocking is not to retreat, but to move into the attacker and move around the attacking limb while deflecting it with as little force as is necessary. Rotating the waist as you move your arm allows the arm to remain relaxed and hollow, not just for better defense, but to allow more effective and explosive counterattacks after the block is completed.

Of course, the feet have to move, too. This is where short, diagonal steps into various stances and body positions as practiced in the diamond drill can help. Always, though, the position you move to must be on balance and put you in position for simultaneous or immediately-following counterattack without significant readjustment. Learning such body distancing is essential, but it is hard to practice at home. Putting a kitchen chair in front of you and moving around it might be one such way to practice the movements when you don’t have a partner to adjust to.

Wow. It’s so much easier for me to show you than describe all this. But that’s my problem since I’m not into making a video today. So let me struggle on.

Back to blocking. I notice that most karateka practice blocking making contact with the oncoming attack quite close to their own bodies. For beginners its often in the last 2-4 inches before they get hit, like in age uke where in most dojos it finishes a fist distance off the hair line.

To block effectively with any block, soft or not, you’ve got to make contact with the attacking limb much farther away from your own body and much closer to your opponent’s — in fact, if you can do so as it is just leaving the opponent’s side (assuming it comes from a chambered position), so much the better.

Think of your attacking distance. Hold your arms out in front of you, elbows slightly bent, fingertips touching. What’s the distance? Maybe 18 inches? That’s the farthest away you should be when you strike your opponent, and even that doesn’t leave much room for a 2-6″ penetration. Even if you used a fully-extended seiken zuki, you’re lucky to be able to extend it out 24″.

So you basically have 18-24″ max in which to recognize the attack and block it before it hits you. Or less. You’re going to need some good reflexes to do that.

Now think of yoko uke, middle body block. It is supposed to end in a position one fist length off the ribs, fist around shoulder high at about a 45 degree angle from perpendicular. For me, that puts my wrist (the part of the arm you’re supposed to block with) about 15″ away from my body.

That would mean that either you have between 3-9″ to see the attack, react and block it if your arm is to end up in that position. That certainly doesn’t give you much reaction time. Now, if the attack were sliding along your arm as it moved into place, that might give you a little more. But yoko uke is intended to knock it away, which means you have to hit and deflect it before that slide can occur.

Now, think of a soft block like kake uke, which also has to pass under the attacking arm, then circle upward for the deflection. That’s a long way to move in a short period of time, so the sooner the blocking arm makes contact with the strike, the more time it has to arc its deflection (ignore for now the use of the other hand to deflect and the arcing arm to move the attack away, which is actually a much more effective way to apply kake uke).

Anyway, I want you to practice only using one arm, say your right, to block a right-handed punch to your middle body. Think of the timing you have to have. And the reaction time you’ll have as well. So there’s a good chance your deflection will not move the punch as far across your body as you need to avoid getting hit.

Back to soft blocks. Now try stepping in 45 degrees with your left foot in a short slide-step as your right arm extends to meet the attack. As the foot sets down, begin to rotate your hips clockwise at the same time as the blocking arm arcs to deflect the strike. Coordinate it with the rotation so they start and end together.

Your blocking arm will end in its’ normal position in front of the shoulder, and may have only moved maybe 6″. But relative to your opponent and combined with the rotation of your waist, it will actually travel a foot or more, and the punch will expend itself right about where you used to be before stepping in, with your hand resting lightly on his/her wrist, or even hooking over it.

See, you have now evaded the attack by moving around it, and your soft block didn’t have to do much more than guide it as you turned your waist.

This evasion is the key to soft blocking, to allow the strike to move past you as you move around it. Of course, then you have to be in position to either counterattack or do it again when they strike with the other hand or the extended arm, but you get the picture.

We all know soft blocking does not oppose force with force. But the best soft block doesn’t use force at all. It gets the hell out of the way, while putting you in position to do your business against your adversary.

Have fun practicing. It will add a valuable weapon to your arsenal.